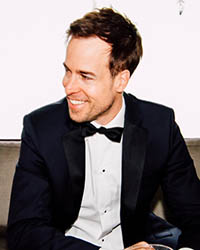 With ICONS OF SOUL Luke McMaster has taken his Motown influenced style to a new level. Icons of Soul in concert is the ultimate, authentic musical experience of contemporary blue-eyed soul. A collection of brand-new tunes, created in collaboration with original hit makers, Felix Cavaliere of the Rascals (Groovin’, Good Lovin’) and Lamont Dozier (Stop! In the Name of Love, Baby Love). These songs are so much fun, you’ll feel like you've known them all your life. Plus, you’ll be treated to fresh covers of early Motown hits and previously untold stories behind the songs. Luke McMaster is best known for “Good Morning, Beautiful,” his 2013 Top 3 Billboard AC smash hit with new age pianist, Jim Brickman and his impressive Canadian gold album run as a duo with Rob James in McMaster & James, (“Thank You,” “Love Wins Everytime,”) with media often referring to them as the “Canadian Hall & Oates.” “I’m collaborating with legends like Lamont Dozier and Felix Cavaliere on some new originals,” says McMaster, the Toronto-based singer, songwriter and producer best known for “Good Morning, Beautiful,” his 2013 Top 3 Billboard AC smash with new age pianist Jim Brickman.

“And what’s especially cool about this project is that they’re still hungry: as much as I’m learning from these masters who wrote unforgettable hits that have formed the soulful soundtrack of my life, they’re equally excited to work with me and my songwriting partner Arun Chaturvedi to write something fresh.” Aside from covering some of the classic immortal chart-toppers written by Rascals founder Cavaliere (“Good Lovin’,” “Groovin’,” “People Got to Be Free”) and Motown sensation Dozier of Holland/Dozier/Holland (“(Love Is Like A) Heat Wave,” “I Can’t Help Myself (Sugar Pie, Honey Bunch),” “You Can’t Hurry Love”) - both members of the Rock ‘N Roll and Songwriter Halls of Fame -McMaster co-wrote two songs apiece with the prodigies at their respective Nashville and Las Vegas homes, capturing the occasions on camera for a corresponding Icons of Soul TV documentary series.