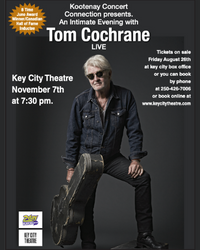 Monday, November 7th at 7:30 pm Tickets: $85.25 (maximum of 8 tickets per person) An intimate evening with Tom Cochrane Live with special guest Nikita Afonso Please don't leave a single empty seat beside your seat. Thank you! Over the course of a long and illustrious career spanning almost 50 years, the pride of Lynn Lake, Manitoba, Tom Cochrane has achieved a level of success known to few recording artists. Starting out as a folk-based singer/songwriter playing the coffeehouses of Torontos famed Yorkville scene in the early 70s, Tom joined forces with rock group Red Rider in 1978 as their lead singer and main songwriter. Together as Red Rider and later as Tom Cochrane & Red Rider, they released a total of nine albums with hits, "Lunatic Fringe", "Victory Day", "Human Race", "Boy Inside the Man", "White Hot" and the chart topper, "Big League". Tom launched his solo career with the release of the anthemic hit "Life Is A Highway" from the breakthrough album Mad Mad World. This record sold over one million copies in Canada alone and another six million copies worldwide, giving it certified Diamond Status in Canada and earning him a Grammy nomination in the United States. A Canadian Music Hall of Fame inductee, Cochrane, both with Red Rider and as a solo artist, has won eight JUNO awards. His legacy as a Canadian icon has been cemented with a star on Canadas Walk of Fame and a 322 km section of Manitobas provincial highway named "Tom Cochrane`s Life Is A Highway". Over the course of his career as a solo artist and with Red Rider, he has released 21 albums and has toured constantly, rooting his place in the hearts, minds, and ears of audiences with his engaging performances while playing his multitude of crowd-pleasing hits. Presented by Kootenay Concert Connections