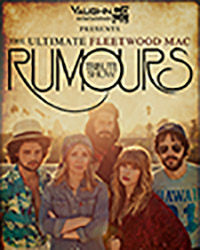 VaughnCo Entertainment is proud to present “Rumours” The Ultimate Fleetwood Mac tribute show based in Los Angeles, California. The group recreates the legendary band in it's youthful heyday from 1975-1979.

“It’s been said imitation is the sincerest form of flattery. I say THANK YOU!”- Richard Dashut (Record Producer - Fleetwood Mac albums including Rumours, Tusk, Live, Mirage, Tango In The Night, and Time.)

Rumours has meticulously put together a show that spares no detail. From period accurate equipment and costumes to spot on characterizations and musical performances, “ Rumours" takes you back to a time when music was still an unbridled cultural experience and bands weren't afraid to put on a show.