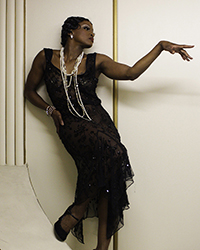 Critically-acclaimed off-Broadway show based on the life of Josephine Baker to be presented across North America,/br> Dynamite Lunchbox Entertainment of Orlando will be presenting Josephine, a burlesque cabaret dream play across Canada and The United States on a tour of 7 cities in over 3 months. Josephine is a one-woman biographical musical that combines cabaret, theatre and dance to tell the story of the iconic Josephine Baker, the first African-American international superstar and one of the most remarkable figures of the 20th Century. After debuting at the 2016 San Diego Fringe Festival and winning the distinctions of "Outstanding Solo Performance" and "Best Show", Josephine played three sold out runs to rave reviews in hometown Orlando Florida before starting a 2017 North American tour. The first stop was the second largest Fringe Festival in North America, the Winnipeg Fringe Theatre Festival, where it was touted as the "breakout hit" of the Festival, selling out the entire run and receiving 5-star reviews from both major publications. The show then went to Indianapolis Fringe where it won “Best National Production”, “Outstanding Female Performance”, “Audience Choice” and “Festival Top Seller”. From there, the show was selected by The Soho Playhouse in New York City to be part of the 2017 Fringe Encore series in October, 2017. Josephine was then awarded the honor of the encore series “Outstanding Production” award, and in early 2018 was offered a limited 5-week off-Broadway run at Soho Playhouse, where it sold out shows and received high critical acclaim. About Josephine Baker- Born in St. Louis in 1906, Josephine Baker achieved only moderate success in the United States, but became an international superstar after moving to France in the early 20’s. She starred alongside white romantic leading men in films in the 30’s, had multiple interracial marriages and homosexual relationships, and performed in men’s clothing before the term “drag” existed in the lexicon. She was also a spy for the French Resistance, a civil rights activist, and the mother of 12 adopted children from 4 continents. Her success in France and Europe often gave her the opportunity to live freely without the racial oppression of her home nation, though she never stopped yearning for acceptance in America.