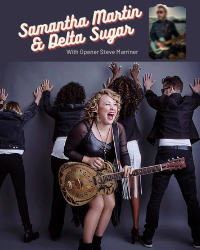 × SAMANTHA MARTIN & DELTA SUGAR - The Perfect Date Friday, November 18th at 7:30 pm Tickets: Regular $ 37 | Big Ticket $31 | Big Ticket Plus $27 Nominated 2019 Juno for Blues Album of the Year! Samantha Martin & Delta Sugar are a red-hot blues/soul band from Toronto.Martin is the lead singer, songwriter and focal point of the group. A dynamic front woman, Samantha Martin possesses a stunning voice that is capable of summoning up tidal waves of spine-tingling emotion in one instance while delicately bringing out the nuances of a gut wrenching lyric in the next. A torrid force of nature, night after night she takes audiences to emotional peaks while leaving them stunned with her sheer pin-you-against-the-wall power. 2018 has proven to be the break-out year so long deserved by Samantha Martin and Delta Sugar. In November 2018, it was announced that “Run To Me” has been nominated for 4 Maple Blues Awards at the 2019 edition (Album of The Year, Songwriter of The Year, Entertainer of The Year, and Female Vocalist of The Year). While Martin is a powerhouse unto herself, the vocal alchemy of Delta Sugar is not the work of a single talent. In combination with what she likes to term her “co-vocalists,” Sherie Marshall and Mwansa Mwansa, the vocal blend Delta Sugar produces is pure, unadulterated gospel-tinged, neuron-tingling magic where the sum is even richer than the already soul-melting parts. Opener Steve Marriner has accomplished as much as he has in the past decade, remains a story that continues to impress on a variety of fronts and for a variety of reasons. Simply put, it is nothing short of astounding that this Ottawa-raised, Toronto-based musician has driven, guided and participated in so many impressive and acclaimed recording and live performance projects. The multi-instrumentalist, song writing singer sits at, or near the top of the list, as “Canada’s hardest working person in show biz.”

*This is a host show