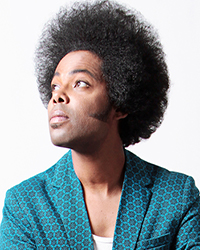 From his international base in Smithers, BC, Alex Cuba appears to be conquering the world. It all started in the Havana suburb of Artemisa, where Alex Cuba (then Alexis Puentes) was born in tandem with his twin brother Adonis. A music teacher’s son, Alex began playing guitar at the age of six, soon joining his father’s band, going on to play professionally in jazz-fusion ensembles. It was love that brought Alex to Canada, after he met and married Canadian tourist Sarah Goodacre in 1999. Together with Adonis they formed The Puentes Brothers, receiving a 2001 JUNO nomination for their first recording. In 2003 the brothers decided to work on solo projects, and in 2005, Alex’s “Humo de Tabaco” won the 2006 JUNO Award for Best World Music Album.
Alex comes out of the Cuban nueva cancion tradition of songwriting – but is known for his vast musical vision. His sweet melodies, pop-soul hooks and powerful guitar riffs depart from the conventional stereotype that exemplifies much of the Latin music landscape today. His is music fully rooted in Latin America generally and Cuba specifically, but beautifully bridges cultures and influences in a way that not only entrances audiences, but has drawn the attention of other artists and musical collaborators, critics and award-givers. He now has multiple JUNO and Latin Grammy wins and Grammy nominations among other awards, made too many ‘best of’ lists to count, opened for Sheryl Crow two nights at the Hollywood Bowl, and clocked 1M streams on Spotify for his single Sarah. And those are just an anecdotal few of his recent accomplishments. In 2017, Alex completed his 6th album “Lo Unico Constante”, delving deeper into his songwriting roots, garnering both Grammy and Latin Grammy nominations. The song Me Queda Este Gritoalso just won Latin Song of the Year for the 2018 installment of the International Songwriting Competition (ISC). World domination seems more and more to be a realistic goal for this brilliant Cuban-British Columbian musician. Don’t miss a chance to see him on his quest.