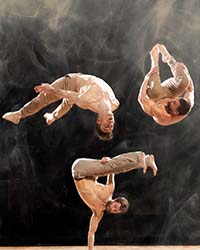 Bromance is a show with relationships at its heart, where handshakes become handstands and backslaps become backflips. Audacious, touching exhilarating, and with a great soundtrack, this is a tour-de-force of cutting edge physical heroics, wittily exploring male companionship and its limits.

Barely Methodical Troupe is an experimental acrobatic circus company. Fusing Hand-to-Hand and Cyr wheel with parkour, b-boying, tricking and contemporary dance giving a fresh perspective on the material they create.

BMT’s first show Bromance won the Total Theatre & Jacksons Lane Award for Circus at the Edinburgh Festival in 2014, opened the London International Mime Festival in 2015 and has been presented at Montréal Complètement Cirque in 2016. It has toured nationally and internationally ever since.

★ ★ ★ ★ One of the most charming circus shows. Astonishing circus skills. — Timeout, Edinburgh

★★★★★ Meticulously constructed, creating a visual feast of dance and acrobatics which amazes and astounds its audience. — Theatre Weekly, London

★★★★ It is the talent and vulnerability that has made this show such a success. — Fest Magazine, Scotland (UK)

★★★★ Bromance breaks down the barriers of what masculinity is in the 21st century. — On The Beat (UK)