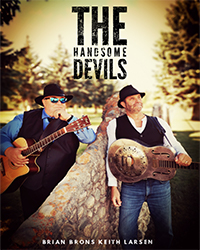 The Handsome Devils The sounds of sweetly picked acoustic guitars, swampy bottle neck blues, or screaming electric. Throw on top of that, powerful, soulful vocals and you have “the Handsome Devils”. Brian Brons and Keith Larsen from Cranbrook B.C. Long time Veterans of the East Kootenay Music scene playing in notable groups such as Kenny and the Cruisers, Idlewild, The Grumpy Old Men, RedGirl, The Band of Brothers and the Voodoo Rhythm Kings. After Years of Jamming and mutual admiration for each others music the pair decided to form with Robert Johnson and tongue and cheek in mind “the Handsome Devils”. The Duo enjoys playing all genres of music but leans towards Blues, R&B, Classic Rock, and Classic Country. They will perform a variety of popular music that spans from the 40’s to the 2000’s. Together they have a vast musical library of songs and years of performance and entertainment experience. From Bars, to Theatres,, House concerts and festival stages such as Star Belly Jam, Fisher Peak Music Festival and opening for notable artists such as Collin James, Streetheart and Allison Brown. With camaraderie and stage banter , they love to one up each other on their guitars, along with connecting and interacting with their audience.

Opener:2 Shots of Whiskey are friends Angie Beddome on guitar and lead vocals and Nicole Kapell on percussion and back-up vocals. Hailing from Kimberley, BC, 2 Shots of Whiskey entertain with original music, classic covers, ‘90’s sing alongs and numerous jokes told along the way. Angie and Nicole have been playing music across the Kootenays and beyond for several years and love bringing live music to diverse audiences.