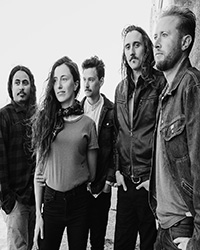 Carmanah is a Victoria-bred band whose worldly and eclectic take on folk-rock has earned them not only a devout local following, but an increasingly large army of fans from across the country. Named after an ancient Vancouver Island rainforest, the band’s reggae-and-funk-tinged folk has allowed the group to share the stage with acts such as Said the Whale, Wake Owl, and Ziggy Marley. They have blown fans away at other events like Rifflandia, Tall Tree, and Canadian Music Week. DOUGLAS FRANCIS MITCHELL has shared his musical perspectives with audiences from Newfoundland to Vancouver Island, and in the U.S.A. His musical career includes tours with 'Three Fools From The Field' and the 'Lost Dawgs'. His songs have aired on CBC Toronto, Regina, Kelowna and Victoria. He toured Alberta and Saskatchewan promoting his album 'Laughter of the Heart'. His children's album 'Let Yourself Sing' was released in 2017. With funding from Creative Spark, he presented song writing workshops for schools in the Kootenays. He just completed his third album 'Unprincipaled'. With over 120 original songs, you can expect satirical, political, environmental and humorous songs on guitar and banjo.