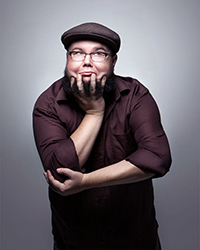 × ** POSTPONED TO OCTOBER 17, 2021 at 7:30 pm Tickets $32.50 Internationally Renowned Spoken Word Artist, Poet and Author returns to perform at Key City Theatre. In a realm where poets rarely intersect with stardom, the Opening Ceremonies for the 2010 Winter Olympics introduced the world to Shane Koyczan. With a collective “Wow”, across Canada and beyond, we found the poet of our generation. The world took notice when Shane’s influential, anti-bullying, "To This Day Project" video went viral in early 2013 with over 14 million views and counting. Powerfully engaging and authentic in attitude, his explorations are relevant to our changing times in the the way that Bob Dylan, Joni Mitchell, Gordon Downie, and Leonard Cohen are to theirs. But unlike the musicians that he is often compared to, poets rarely infiltrate pop culture. Koyczan emerges in a new wave of 21st century poetry that dares to belong to the people and speak directly to them in their own voice.

Koyczan has written over a half dozen popular books and has 4 albums to his credit. Books such as Visiting hours, Stickboy, Our Deathbeds will be Thirsty, Silence is a Song I Know all the Words to, To This Day and a Bruise on Light have earned him much acclaim in the past 15 years as have his recordings. However Koyczan is best known for his award winning spoken word performances . With his rhythmic verse in high gear, he navigates his audience through social and political territory with a furious honesty and a tender humanity that has brought audiences to their feet in New York, London, Edinburgh, Sydney, Stockholm and Los Angeles, to name a few. He has received 5 star reviews for his performances around the globe. Winner of the US Slam Poetry Championship and the Canadian Spoken Word Olympics, Koyczan is truly an extraordinary talent. He has over 16 million YouTube views and still growing.

What do people say about Shane Koyczan? Marsha Lederman of the Globe and Mail says, “A Spoken word Superstar.” “A beacon of hope and change,”said The Georgia Strait. Cassie Silva from Review Vancouver commented: “Shane’s words were so emotional and powerful it was impossible not to be drawn in. Shane doesn’t just recite poetry. He brilliantly manipulates the emotions of the audience members, bringing them from tears of sadness to tears of laughter.”