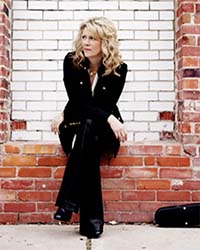 Natalie MacMaster Up Close and Personal

Canada’s "Queen of the Fiddle” to Perform in the Kootenays in March/2020 2020 Funo Nomination Traditional Roots Album: Sketches One of Cape Breton, Nova Scotia’s most important exports and a superstar in the Celtic music world, fiddler and step-dancer Natalie MacMaster will be bringing her remarkable live Up Close and Personal concert experience to Cranbrook’s Key City Theatre on March 8th.

Natalie MacMaster has built a sterling multi-decade career on electrifying playing and must-see live performances. Her extensive discography showcases MacMaster as both soloist and marquee collaborator and is now working on what will be her 12th solo LP.

The awards and accolades for MacMaster have been numerous. She has won Juno’s, 19 East Coast Music awards, 5 Canadian Country Music awards as Fiddler of the Year, been nominated for a Grammy, and was presented with the Order of Canada Award in recognition of her peer-less artistic status. Her collaborations with other artists have been very notable as well. She was featured on Yo-Yo Ma’s Songs of Joy and Peace which won a GRAMMY AWARD for Best Classical Crossover Album. She has performed with Bela Fleck, Faith Hill, Carlos Santana, the Chieftans, Don Henley, Buddy MacMaster, Jesse Cook and Johnny Reid.