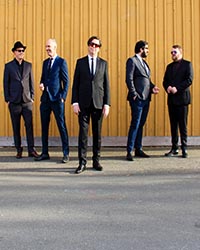 The BIG O was unmistakable with his trademark sunglasses, distinctive, powerful voice, complex compositions and dark emotional ballads. From 1960 to ’64 Roy Orbison landed 22 songs on the Billboard Top 40, including “Only The Lonely”, “Crying”, and “Oh, Pretty Woman”. His impassioned voice, bridging the gap between baritone and tenor, coupled with his signature arrangements ensured the charting of the hits “Dream Baby”, “Ooby Dooby”, “Blue Angel”, “Blue Bayou”, “You Got It” and “In Dreams”. Mike Demers delivers a spot-on performance of Orbison’s signature sound.

And of course, THE LONELY delivers a sensitive and dynamic tribute to the one and only Roy Orbison IN ADDITION to the hits of The Traveling Wilburys and The Everly Broth-ers. Veteran Mike Demers leads this group of musical journeymen in their mutual and deep appreciation of the timeless music of an era. THE LONELY approaches the music with a humble spirit and sincere desire to recreate the sounds and feel of the original recordings. The band has been selling out shows right from their debut.

“For 4 decades I worked in the music industry. The one constant has been the music of Roy Orbison. When I heard that a Roy Orbison Tribute was coming to town I said, ‘Well this I have to see.’ THE LONELY blew me away”! exclaims David Chesney, Publisher White Rock Sun,Canada’s FIRST Internet Newspaper.