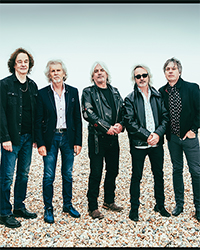 Classic Rock fans rejoice…..in 2019, Iconic British pop legends THE ZOMBIES joined the likes of Stevie Nicks, Def Leppard, Janet Jackson, Radiohead, and Roxy Music as the 2019 class of the North American Rock N Roll Hall of Fame. Fittingly, the induction ceremony took place exactly 50 years to the day, after the Zombies’ classic, “Time of the Season” first hit #1 on the charts in America.

The Zombies were part of the British invasion to North America in the 60’s with the likes of The Stones,The Beatles, Gerry andthe Pacemakers, Eric Burdon and the Animals, and many more establishing a worldwide base of fans in a very quick fashion.

If you are a fan of old time classic rock, you are not going to want to miss The Zombies LIVE in concert at the Key City theatre on April 22, 2020. it’s the chance of a lifetime to hear and experience one of the world’s longest lasting and iconic rock/pop bands in the intimate acoustical surroundings of Cranbrook’s Key City Theatre.