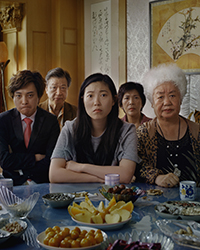 Rotten Tomatoes critics give this movie a 99% Rating

Anyone paying attention to the Sundance Film Festival earlier this year knows “The Farewell” is one of the can’t-miss films of the summer movie season. Lulu Wang’s latest directorial offering earned some of the best reviews in Park City and was named the festival’s best picture and best director in IndieWire’s critics’ poll. The family comedy-drama is a dramatic breakthrough for Awkwafina, who previously gained attention on the big screen with supporting roles in “Ocean’s 8” and “Crazy Rich Asians.”

“The Farewell” stars Awkwafina as Billi, a Chinese-American woman who travels to China to attend a family wedding. The only issue is that the wedding is a sham, designed as an excuse to bring Billi’s entire family together under one roof so that everyone can spend time with their terminally ill matriarch, Nai-Nai. No one is allowed to tell Nai-Nai abut the lie, which sends Billi on an unexpected journey of self-discovery and family bonding. The supporting cast includes Tzi Ma, Diana Lin, Chen Han, and Zhao Shuzhen.