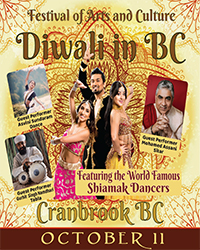 × Friday October 11, 2019 Reception 6:00 pm Chai & Deserts Performance 7:00 pm Tickets $30 Regular | $ 20 Youth | $10 Child under 12 **Dance Workshop PLUS Show $40** Featuring the World Famous SHIAMAK DANCERS from Vancouver! Diwali in Cranbrook is a joyous multicultural showcase extravaganza featuring numerous dance & musical performances by local groups & professional headliners who will have you up & dancing in the aisles! Join us for an intercultural celebration of Diwali’s “victory of light over darkness!”

"GET YOUR BOLLYWOOD ON!" Dance Workshop Thursday October 10 at 6:30 pm at Key City Theatre Your $40 Fee includes ticket to the show. Choose your seat to register.

SPECIAL GUESTS: MOHAMED ASSANI - Sitar Classical Sitar Player Mohamed Assani is a celebrated sitar player known for being a proactive ambassador for his rich musical tradition. Throughout his extensive career, he has brought the sitar to new audiences through innovative collaborations that have stretched the boundaries of his instrument. ASHVINI SUNDARAM - Traditional Dancer Ashvini Sundaram is a Bharatanatyam performance artist receiving ongoing training from multi-award winning and highly sought after danseuse, Guru Rama Vaidyanathan, in India.

GURDIT SINGH NAMDHARI - Tabla Player Born into a family of musicians, Gurdit Singh Namdhari promises to be a great Tabla player. He started Tabla training at the age of seven under the guidance of Ustad Late Shri Avtar Singh Namdhari Ji. Thereafter, he continued training at the age of nine under the guidance of Late Padma Bhushan Pandit Samta Prasad Ji alias Gudai Maharaj Ji. He gave his first tabla performance with Guru Ji at the age of eleven at Kamai Auditorium. He is an approved artist with All India Radio. "He is a humble, promising, and intelligent tabla player".

We are thrilled to be working with Rohit Chokhani Artistic Director of Diwali in BC, Curator for Diwali in Cranbrook, Creator for the show Journey to South Asia which will be featured for Diwali in Cranbrook. Rohit Chokhani is a Jessie Richardson Theatre Award-winning arts curator, as well as a director and cultural leader. Currently, he is the Artistic Director for Diwali in B.C. Rohit was awarded the prestigious 'Vancouver Now Representation and Inclusion Award' in 2018. He is also the recipient of the Jessie Richardson Theatre Award in the Large Theatre Category for 'Significant Artistic Achievement' (2017) and recipient of the Shiamak Vancouver Community Award (by Bollywood star choreographer Shiamak Davar) in recognition of outstanding achievement in the field of Entertainment and Theatre Arts (2017). He is highly passionate about making performing arts equitable and sustainable.