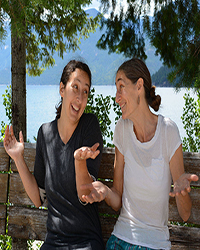 On the Other Hand: Two Musical Tales

× Saturday September 14 at 7:30 pm Regular $23 | Senior $21 | Youth $17 On the Other Hand: Two Musical Tales of Choice Rated 14A - Some Adult content and language Join Bessie and Ellie for an evening of two solo performances that dwell at the nexus of memoir and musical theatre!

Bessie Wapp’s story “Jesus Christ Superstore” (25 minutes) is a true tale about a surreal weekend in which birth control, the big box phenomenon and a cinematic cult classic collided. The real life events portrayed in Wapp’s story came on the heels of an 11th hour realization that she had “forgotten to have children”. This piece is an attempt to understand that challenging time - using humour, song, and one very large honeydew melon.

Ellie Reynolds’ brand new one-woman show “Matchmaker on the Roof” (70 minutes) is an intimate and often hilarious journey of the heroine’s flight from ‘Tradition’ and her home in England, across the Atlantic to the Kootenays - where she finds a surprising and ‘most unusual match’. Borrowing bits of the familiar and wonderful music from Fiddler on the Roof, Ellie tells her own musical tale of bold love, border crossing, and the (re)discovery of Tradition. Except this time it’s the omnipresent and playful Matchmaker, rather than a Fiddler, that forms the central metaphor.