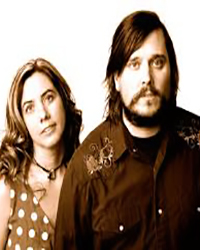 × Saturday October 5 at 7:30 pm Tickets $35 | $29 | $25 OPENER: THE PARSONS Roots powerhouse duo The Small Glories are Cara Luft & JD Edwards, a musical tour-de-force partnership planted on the Canadian Prairies. Thrown together purely by accident for an anniversary show at Winnipeg’s venerable West End Cultural Centre, The Small Glories could almost make you believe in fate. With a stage banter striking a unique balance between slapstick and sermon, these veteran singer-songwriters have a way of making time disappear, rooms shrink, and audiences feel as they are right there on the stage with the band — writing the songs, living the songs, performing the songs. It’s not uncommon for listeners to find themselves laughing, dancing, crying, or caught up in a good ol’ fashioned sing-along. “We’re folk singers, we try to write stuff that people can relate to,” says Edwards, whose looming stage presence and penetrating eyes find him the yin to Luft’s petite, snort-laughing yang. The material of a Small Glories concert is welcoming in terms of subject, folk-pop melody and instrumentation — songs of love, loss, and environment, delivered with soaring, interwoven vocals on various combinations of stomping clawhammer banjo, guitar and harmonica. However, a Small Glories performance is really about what happens in-between the songs. “The feedback we get from a lot of audiences is that it’s not just about the music for them,” Luft says. “It’s the whole package.” Don’t let the relative youth of Clayton & Joelle Parsons fool you—they are old souls with a sound that transcends time. Their genuine country-roots style is reminiscent of the ‘60’s American folk revival scene that birthed Joan Baez, Emmylou Harris, Pete Seeger, and Peter, Paul & Mary. Clayton Parsons grew up with music as a constant and he counts his parents and seven siblings as his primary musical influences. Along with his dad’s rendition of James Taylor songs, Parsons also listened to plenty of Fleetwood Mac, the Beatles, Neil Young and Nickel Creek. He played solo and with numerous bands in his hometown of Cranbrook, B.C, before joining alt-folk band The Good Ol’ Goats, and meeting vocalist Joelle—and falling in love with her voice, and then the singer herself. Joelle was surrounded by song as a child, and began singing with church and school choirs, musical theatre productions and at community events. She was influenced by old gospel songs and traditional hymns as much as she was by classic rock and alternative artists. And when she and Parsons finally met, their chemistry—musical and personal—was undeniable. When their previous band went on hiatus, The Parsons emerged. Throughout their musical partnership, The Parsons have won fans wherever they’ve travelled. Their lyrics are an authentic representation of their often wide-eyed wonder at the world, finding joy in the simple things and profundity in what many of us take for granted. The duo doesn’t rely on heavy instrumentation to underscore the sweetness of their honey-warmed harmonies; Joelle’s rhythm guitar playing compliments Claytons finger picking, providing the perfect thread for their exquisite voices to weave their way around eachother, creating an uncomplicated but gorgeous tapestry of music. The deftness of their singing and songwriting has not gone unsung: the recently married duo were recognized by the Kootenay Music Awards with the Album of the Year for their debut release in 2016. Live, their sweet and soulful music is punctuated with stories behind the songs, inside jokes that the whole audience becomes a part of and true generosity of spirit.