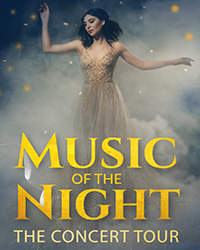 Music of the Night - the Concert Tour

Music of the Night – The Concert Tour, is a concert celebration of Andrew Lloyd Webber's 70th Birthday and his acclaim as the most successful musical theatre composer of all time. Audiences across BC will have the unique opportunity to hear performances of some of the most iconic musical theatre scores ever written including selections from Phantom of the Opera, Evita, Cats, Jesus Christ Superstar, Sunset Blvd, and more! Brought to you by the acclaimed Sound the Alarm: Music/Theatre, under the artistic leadership of Alan Corbishley and the musical direction of Canadian music impresario Frederik Robert, the cast is comprised of provincial and international musical theatre professionals. Melina Schein, soprano, is a New York native, now residing in the Okanagan, who has numerous Broadway and Off-Broadway credits, including Phantom of the Opera. Internationally acclaimed tenor Nic Kyle has performed extensively through London's West End and played Jesus in Jesus Christ Superstar in Australia and New Zealand Tours. Albertan mezzo-soprano Amy Gartner has performed in many musical theatre productions throughout BC. Zander Felton, baritone, is a Vancouver Island-native and one of our province’s most promising emerging talents. Sound the Alarm’s Music of the Night tour will remind seventeen BC audiences, from Courtenay to Cranbrook, why Andrew Lloyd Webber is the musical phenomenon he is known to be. Website: www.soundthealarm.ca