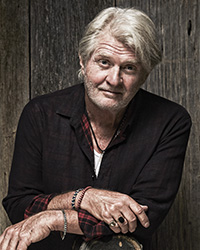 Tom Cochrane and his band Red Rider, have firmly cemented themselves as a popular arena touring act across Canada in the past few decades. However, this spring, Cochrane and Red Rider will be performing a series of intimate theatre shows in both Alberta and in British Columbia.

Tom Cochrane has been the recipient of 8 Juno Awards, plus multiple songwriter awards from SOCAN, CAPAC, and ASCAP. Cochrane is also a GRAMMY nominee, a member of the Canadian Music Hall of Fame, and the Canadian Music Industry Hall of Fame. He holds an honorary doctorate, has a coveted place on Canada’s Walk of Fame, and has been honoured with both the order of Manitoba and the Order of Canada.

AND then there is his incredible music. The album, Mad Mad World remains among the top selling albums in Canadian music history, achieving rare Diamond-Certified status on the strengths of such hit singles as the title track, No regrets, Washed Away, Sinking Like a Sunset, and of course Life is a Highway, which reigned at #1 for 6 straight weeks in Canada, and reached #6 on the North American Billboard Hot 100, and went on to become recognized the world over.