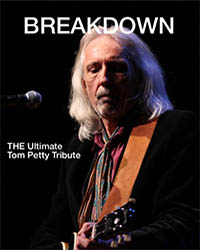 × November 9, 2018 at 8:00 pm Tickets: $39.50 Tom Petty was an iconic American singer-songwriter, multi-instrumentalist and record producer. He was most famous for his band “Tom Petty and the Heartbreakers,” which formed in 1976. Petty recorded a number of hit singles with the Heartbreakers and sold more than 80 million records worldwide, becoming one of the best-selling musicians of all time.

Sadly, last October Tom Petty passed away suddenly, leaving to mourn millions of loyal fans around the world, including Martyn Jones, who now pays tribute to one of his favourite artists in the band Breakdown: The Ultimate Tom Petty Tribute. Jones himself has recorded on over 70 albums as a recording artist and professional performer.

Breakdown’s tribute is being described as the most accurate representation of Tom Petty and the Heartbreakers. Covering all of the hits from as early as 1976, Breakdown re-creates the look and sound of Tom Petty performance. Performing in theatres and on festival stages across Western Canada, Breakdown always puts on an exciting and energetic show.

The band brings together a slate of high caliber professional musicians who share a genuine love and appreciation of the legendary Heartbreakers. Marty’s ability to magically morph into Tom Petty provided the opportunity to make this convincing show a reality. Audiences will be thoroughly entertained by this Southern gentleman and a band that totally rocks!