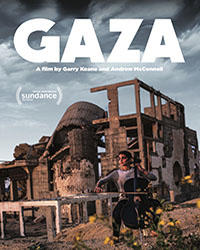 × GAZA - Sponsored by Save On Foods 7:00 pm Tickets $12 Rockies Film Series It's hard to imagine anybody living a normal life in the Gaza Strip. Frequently labeled as the world's largest open-air prison, it makes an appearance on news reports every time a confrontation erupts between Israel and Hamas. From TV sets thousands of miles away, this tiny piece of land has been reduced to an image of violence, chaos and destruction. So what do the people do when they're not under siege?