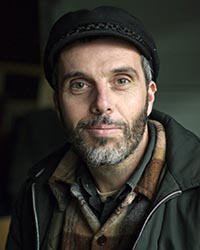 In 2001 John Wort Hannam quit his teaching job and spent 10 months depleting his savings while sat at his kitchen table, wearing a lucky hat, writing his first ten songs. Those songs would become his first recording Pocket Full Of Holes, released in 2003. Seventeen years later, the Alberta musician is releasing his seventh full-length recording Acres Of Elbow Room and has a few feathers in that lucky hat for his first six offerings. Feathers that include a JUNO nomination, a Canadian Folk Music Award for Best Album of the Year, a CBC Galaxie Rising Star Award, a Kerrville Texas New Folk win, and numerous Western Canadian Music Award and Canadian Folk Music Award nominations. Recent years have seen a great deal of change in John’s life - becoming a Dad, turning 50, a move to the “big city” of Lethbridge, a long, deep bout of depression, and episodes of losing his singing voice. But John has emerged a better songwriter, a better singer, and a better player. On Acres Of Elbow Room, John has further refined his lyrical style and has landed squarely on his niche in the folk-roots world. He’s spent years learning the craft of songwriting and is taking those tools to write some of his most personal songs. He has, quite literally, found his voice.

Brackish Betty Brackish Betty is an island girl from the heart of the North Coast who found her roots in the Kootenays. Belting out soulful blues and rock, she brings salty and honest lyrics together with heartfelt acoustic rhythms that will leave you wanting more.