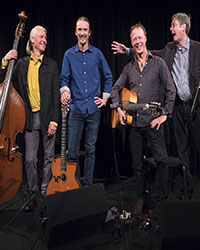 × Fisher Peak Winter Ale Concert Series Wednesday March 18 at 7:30 pm Opener: The Confluentials Tickets $28 | $26 Marc Atkinson Trio with Cameron Wilson With an impressive career spanning over two decades, the dazzlingly gifted acoustic guitarist Marc Atkinson never fails to astonish. He wears his virtuosity lightly, though, and refuses to let technical facility overwhelm the innate beauty of a melody or the emotion hiding within a lovely old tune. The late CBC Radio host Jurgen Goethe hailed Atkinson’s Trio as “one of the top ten of the world’s string trios.” These gifted artists have been critically acclaimed and widely awarded: the second Trio recording was voted one of the top five albums in North America by Acoustic Guitar Magazine, while the Junos and the Western Canadian Music Awards have also paid their respects to this ridiculously talented six-stringer. From blindingly fast pyrotechnics to dreamy ballads, Atkinson serves up a banquet of music that draws from classical, jazz, and roots traditions. Oh, and he’s a very funny presence on stage, both in terms of his droll anecdotes but also in the sly humour that can infuse his playing.

The Confluentials Cranbrook’s Christina Blaskovich and Barry Coulter are the compelling acoustic duo called The Confluentials. Well known locally for their 21st Century spin on Celtic traditional songs and instrumentals, and fresh takes on English and American folk rock. This pair is skilled at layering vocal harmonies over accompaniment by guitar, Irish bouzouki, mandolin, fiddle and more.